A team of fun, hard working, creative, art-inspired women in Las Vegas living life to the fullest… “just over here enjoying what we do.” Happy to help make your life a little bit easier and a little less stressful during your everyday routine. Specializing in machine permanent makeup techniques known for soft-natural results, AND or that everyday makeup look! We can do it all and we strive for long lasting results! We truly feel the universe brings us all together for a reason and we look forward to meeting you soon! 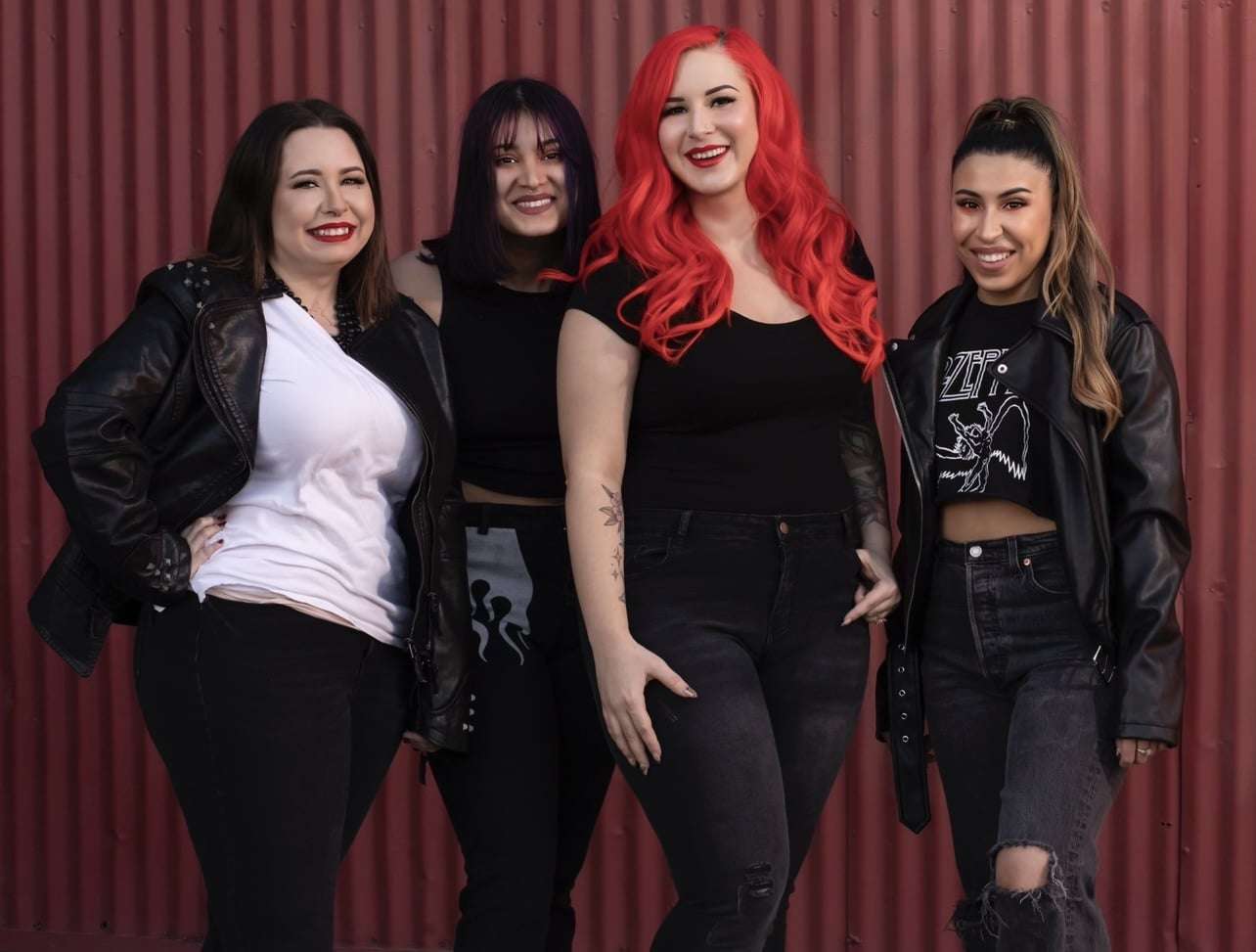 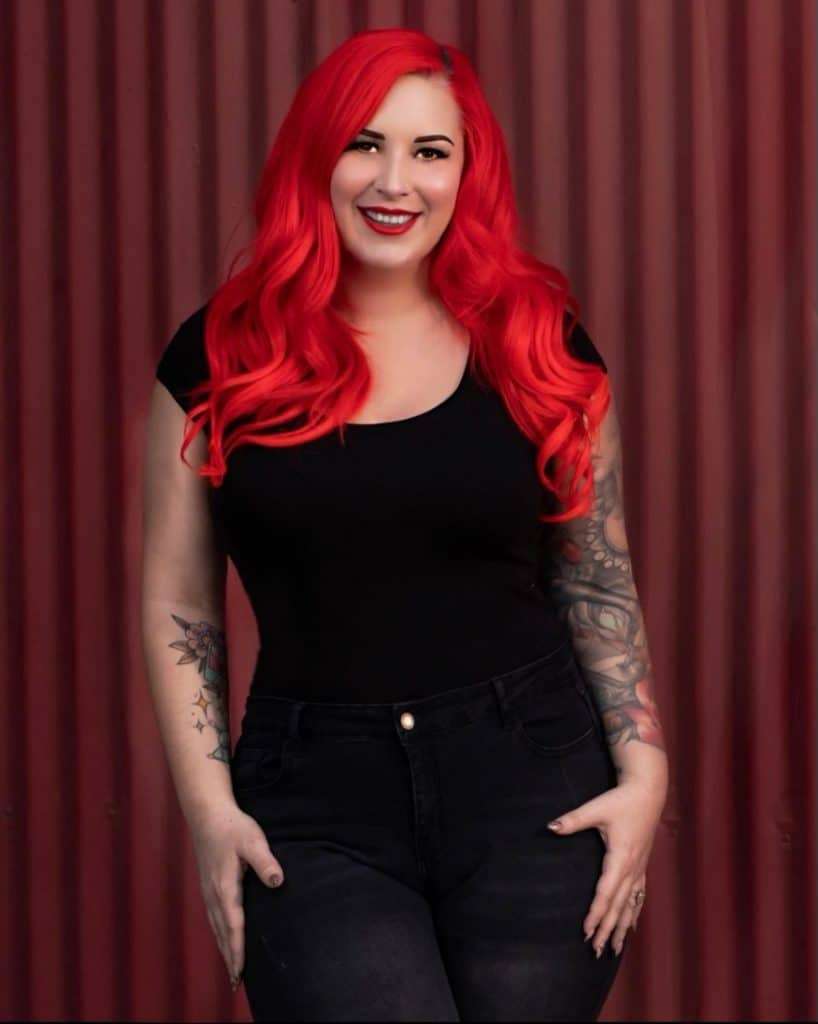 Amber was born and raised in Des Moines Iowa where she received an art degree in Fashion Design and Merchandising. At 20 years old she moved to further her education where she attended FIDM in Los Angeles California. Graduating top of her class, with a degree in Visual Communications and advanced digital graphics, she knew she was on the right track!Amber is an accomplished artist who studied and practiced many different forms of art for 19 years such as computer graphics, visual design, fashion design and sewing, just to name a few…giving her a very exceptional eye for overall design, details, and symmetry. She has always been extremely comfortable using different mediums to create any type of art, it comes natural to her.Her career change happened when she got permanent eyebrows and eyeliner herself. This experience changed her life! Her love of art and helping people had finally come together. She knew from this point forward she had found her true artistic path.Ambers artistic passion and background as an artist has enabled her to become a globally known permanent makeup artist, trainer, and mentor located in Las Vegas Nevada. She was taught by world renowned artist Teryn Darling owner of Girlz Ink Studio for 6 years. During this time, she was able to learn so much, speak at conferences, travel the world teaching classes, tattoo on stage, and teach over 500+ artists (and counting) how to perfect their permanent makeup techniques. For all this, Amber is beyond grateful!Amber specializes in powder brows, ombre brows, combination brows, machine hair stoke eyebrows, many different eyeliner styles where she is known immensely for her wing eyeliner! She also offers lip tattooing. She believes being a well-rounded artist, problem solver, and being highly detailed is what makes her a good artist. She is always taking new classes and staying up to date with new techniques!Amber is always looking to grow and learn! In 2021 she decided to open a beautiful studio of her own in Las Vegas Nevada to offer you all her permanent makeup techniques, while upholding the highest standards in the industry. She truly feels the adventures have just begun and welcomes you in her new space!

Brisa was born in Riverside California and was raised in Las Vegas Nevada. At a young age, she was highly creative and enjoyed drawing a lot. She had a love for art and anything creative! Self- expression and helping others are some of the most important things to her. She used to dream of how she could one day combine the 2 passions together.

Unfortunately, she fell out of touch with her creative side and decided to pursue a career in the medical field as she believed she would not be able to make it in the field of art. She attended East Career and Technical Academy and was enrolled in the sports medicine program. She loved learning about human anatomy and how to help athletes heal their injuries, but she felt like something was missing, and that was her creative side. At the end of that school year, she decided that the medical field was not for her and she wanted to do something to not only help others but that also allowed her to feed that creative energy that she has always had!

A few years later she attended UNLV and took an art class and regained her passion for art once again! The fire in her belly grew every time she would pick up a pencil and draw. She definitely wanted to be an artist and now she just had to figure out how to make it her whole life!

After a few years of drawing and growing her portfolio, by sheer chance she happened to come across a job opportunity within the permanent makeup industry. She just knew this would be perfect for her! Along with having great drawing skills, she also is very talented with topical makeup. She has done her makeup since for as long as she can remember and has always been the “go to” friend to do everyone else’s makeup!

Brisa loves exploring fun and inventive makeup looks, and always wants to stay up to date on what is new in the industry! These ambitions and skills combined has prompted her to also be very detailed and meticulous. She knows that being detailed, patient, and determined along with the love for helping others is what sets her apart.

Meeting Amber and seeing the way she helps others feel more confident made Brisa feel as if she had found the path she wants to pursue and excel in. Even though it is just the beginning of her journey she is super excited to grow and become the best! 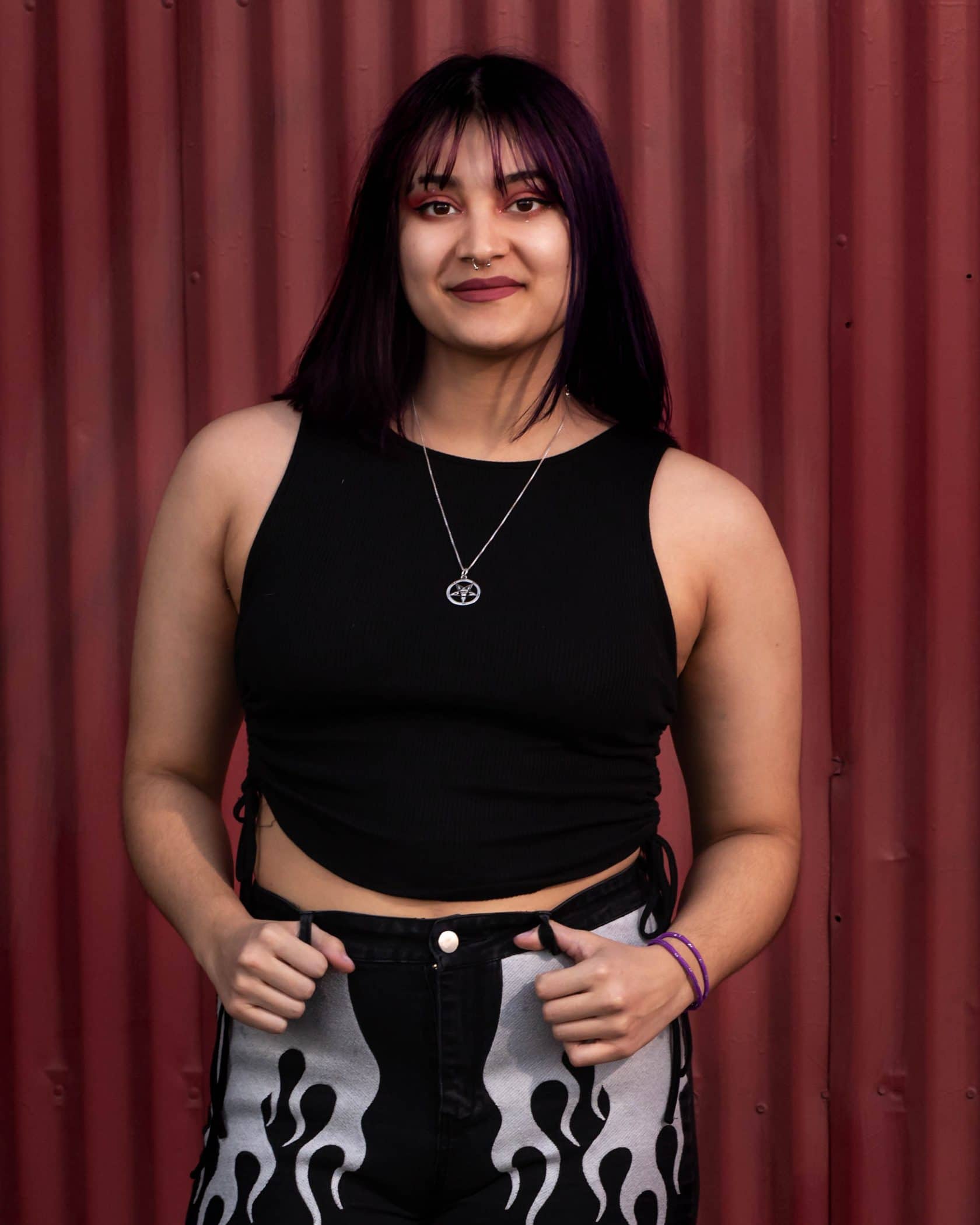 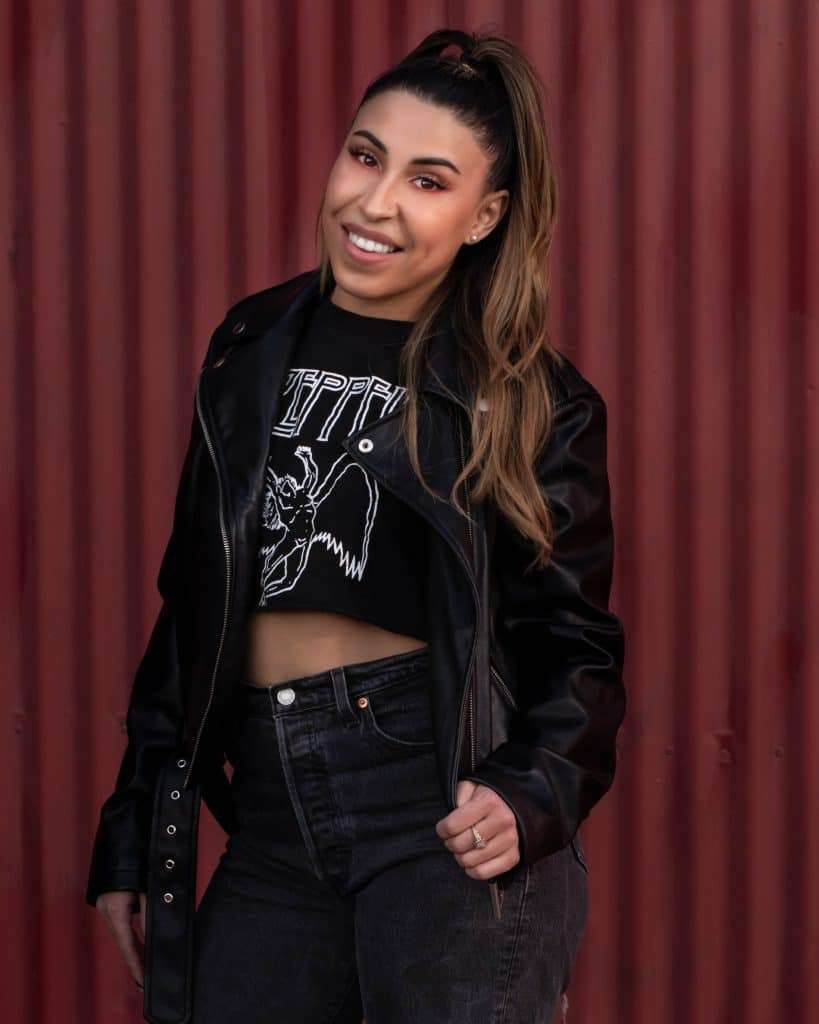 Tania was born in Santiago, Chile and moved to Las Vegas with her parents when she was only 2 years old, she says she’s basically a Vegas Native. From a very young age she showed lots of interest in all types of art forms, drawing, painting, writing and musical instruments. Her favorite part about school was always writing stories, designing poster boards, creating display models, playing the violin and anything that allowed her to express her creativity. Her freshman year in high school she became her schools newspaper entertainment editor where she wrote and designed her segment and front covers. This is also around the time where she started experimenting with makeup and noticed she was actually good and liked it. Since then her friends let her practice makeup looks on them as well as letting her thread their eyebrows which she learned from YouTube! Her friends and family encouraged her to pursue a career in beauty or cosmetology since she was good at it and enjoyed it, but that was more of a fun hobby for her and she wanted to go the Journalism route.

She graduated from CSN in 2015 with an Associates degree in Journalism and later received her degree in Business Management with a minor in Marketing. She loved all the “creative” aspects of Journalism, Business and Marketing, but she couldn’t fully see herself working in any of those career paths for the rest of her life. During the infamous quarantine of 2020 she had more time to take her passions seriously and practiced her drawing and graphic design work. She quickly began freelancing commissions, logos and designing for small business as well as helping them manage their social media and marketing. Tania realized that she really loved being creative and knew that art and design truly fulfilled her. She began doing research on tattooing and permanent makeup but she never took the leap, although she thought about it the entire year.

In 2021 her interests in tattooing and permanent make up were still there and her friends and family encouraged her to take it seriously. She searched for months for a school or course but she honestly wasn’t impressed by anything she saw, until she came across an opportunity of a lifetime. Not only was MsAmberRed looking for someone who would help her design and upkeep her social media, she was also looking for an apprentice! All of Tania’s interests of social media marketing, content creation, makeup and tattooing were all combined into one, she knew this was it. After meeting with Amber and being in the studio Tania knew this was it and dove in completely. She loves everything about PMU, the environment, the time and dedication that goes into, but most importantly… how happy clients are after seeing their transformation. Aside from art, Tania loves music, dancing, puppies, kittens, soccer and Italian food!

Patti is from Kansas City, MO. Patti’s father is an extraordinary artist and fabulous woodworker. The artistic gene runs in the family. At a young age she got into drawing fashion and portraits.

At the age of 16 Patti moved to Arizona with her family. Over the years her artwork had improved and she decided that she wanted to become a tattoo artist. A few months after her 18th birthday Patti became a tattoo apprentice in Bullhead City, AZ. She met her husband at the tattoo shop. He was a Tattooer there.

Patti decided to put her tattoo career on hold to have their first son. Over the years she ended up working at a casino hotel in Laughlin,NV. She climbed the ladder and became the Assistant Hotel Manager of two properties and had their second son during that time. Over the years Patti would take the occasional commission to draw a portrait but really didn’t have the time to draw as much as she would like.

The family moved to Vegas to be closer to her husband’s work. After moving to Vegas she became pregnant with their third son.

Patti has always wanted a career in which she could showcase her artwork and help people but it wasn’t a practical option for many years. She decided to look into PMU. She had heard about it here and there and even had her own eyebrows done. After looking into it, she realized this was her calling. This is where she is supposed to be. Between her love for makeup, her amazing artistic eye and desire to help people she couldn’t think of a career she would love more. After her diligent research over the years, she decided that the right time was coming to start this new journey. Patti researched different ways to be able to accumulate all the knowledge that she needed to become a PMU artist. She knew that she wanted to learn from the best. She wanted an opportunity to gain as much knowledge as she could. Having the artistic ability is only a piece of the puzzle.

Patti wanted to be able to provide nothing but the best to her clients. After research she ended up on Amber’s website. Patti discovered that Amber was looking for an apprentice. It was sooner than she had planned to dive into this new world. She couldn’t pass this opportunity up though! The universe was aligning and this was meant to happen. Patti had met with Amber and the rest was history. Patti is extremely motivated and excited to be able to help people with her new skills. 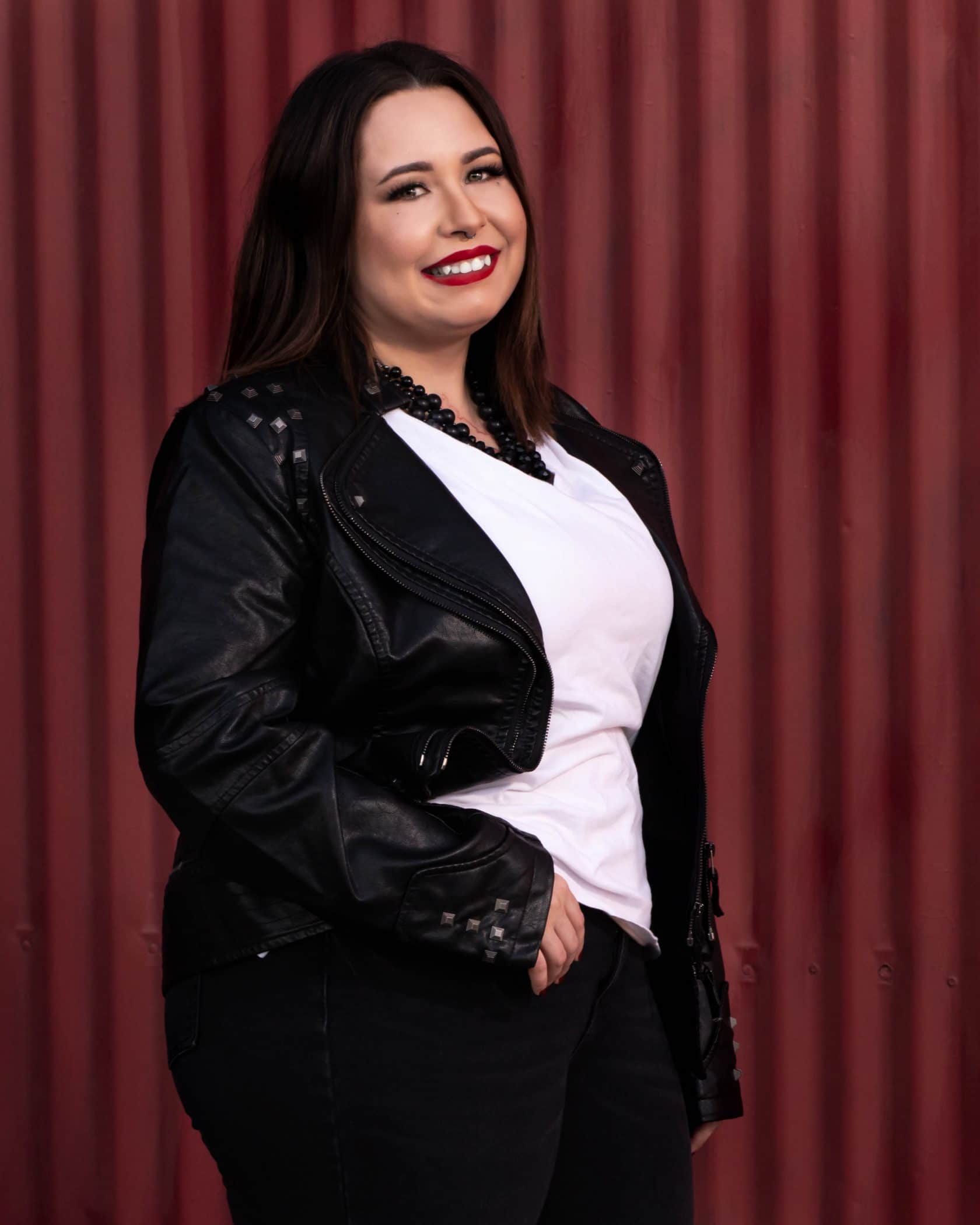 What our clients have to say: